5. The Wabbit, Lapinette and the Hacker 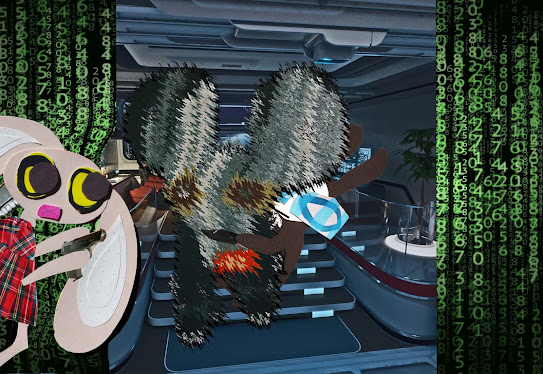 Lapinette swept back the curtain and there was the Hacker. She waved a pistol at him and while he was distracted, the Wabbit snuck in behind him. "You horrid Hacker!" yelled Lapinette. Lapinette was livid. The Hacker's penetrating stare held her in a vice like grip. The Wabbit had her edged weapon and grasped the Hacker from behind. But the knife slid off his neck like an evil dream. Lapinette's automatic bent sideways "I am the rambunctious Hacker," he cried, "No gun can fire me, no knife can throw me." Lapinette tried to bend the automatic back but it wouldn't comply. The Wabbit slipped the edged weapon back in his fur and stood back. "You have an interesting turn of phrase," he grunted. The Hacker scowled. "It's the phrase that turns - not me. I am Ice Mouse Hacker and I turn for no-one." The air grew cold and Lapinette suppressed a shiver, then shrugged. "As you wish," Mr Mouse." The Hacker's lips formed into a grin. "What is your wish, Mr and Mrs Bunny?" "Stop the outages," snapped the Wabbit. "Then where will I get my fun?" said the Hacker. He pulled the curtain back and swept the Wabbit out with a wave of his paw. "I am neither pixie nor pixel. I am Hacker." The curtain closed and dissolved. There was nothing behind. Only clouds. The Wabbit grimaced. "That went well." Lapinette inspected her automatic and racked the slide. Her mouth set in a line. "How do we get him?" The Wabbit considered. "Satanic Runes?" Lapinette's lip curled. "Glurpy Glue!"
[Background. Pixabay Peter Pieras]
at October 16, 2021