6. The Wabbit, Lapinette and the Highway 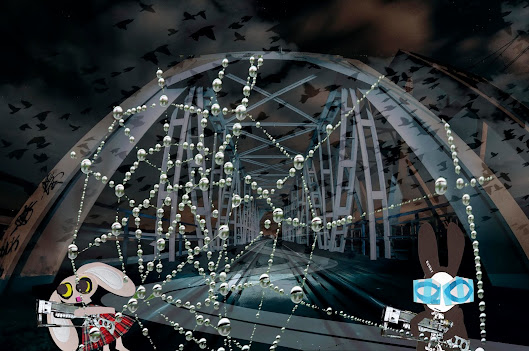 Lapinette and the Wabbit stood guard at the iron bridge. It was on the Dark Super Highway and the Wabbit had spotted it through the clouds. Lapinette was sceptical "How do you know he'll come this way?" The Wabbit shrugged. "They say you can set your clock by him." Lapinette gave a sardonic grin. "Who on earth does the think he is? Kant?" The Wabbit chortled, He'd recharged their snazers with special concoction devised by Big Blue Snail and Major Duetta Spyder in the Wabbit's shed at the back of the Department. It was lethal and would trap anything. Devised as a lure, the holes were an illusion and were filled with snail slime, spider goo and Evostick. Nothing got through. Nothing. Suspended from the iron girders of the bridge, they looked like a spider's web and glistened in the night. The Wabbit looked out. He and Lapinette had different ways of looking. He crouched over his rifle and stared at the middle distance. Lapinette bounced up and down on her rabbit legs. Birds fluttered across in great number. The Wabbit sniffed the air. "Birds?" he said. He made a wavy motion with his paws. Lapinette nodded. "The Dark Cloud certainly cuts it for authenticity." They stared out for a while. "What's that?" asked the Wabbit. Lapinette's ears swivelled and her nose twitched "It's him." The Wabbit wasn't sure. How can you tell?" "Garlic mouse droppings," she said. Now the Wabbit could smell him too. He lifted his snazer and glanced at Lapinette. "He's going to meet a sticky wicket."