1. The Wabbit and the Big Outage 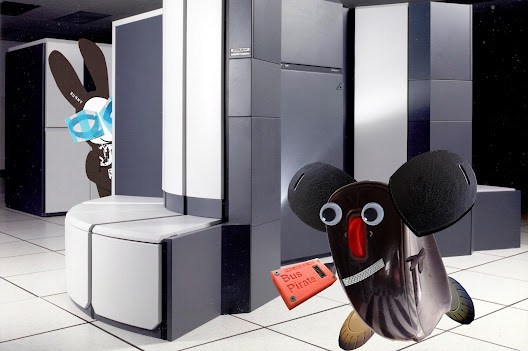 The big outage went on and on and every computer in the land was affected. So the Wabbit decided to seek out advice. Who better than Hardhack Rat? Hardhack didn't take appointments but the Wabbit didn't have to make one. He crept into a new bay and watched Hardhack run up and down, looking for glitches. The new bay was very chic and even had a soft seat. The Wabbit was secretly impressed but he chose not to show it. "Psst Hardhack. How are things?" Hardhack turned. "Just fine Wabbit. How do like my new minimalist supercomputer?" The Wabbit smiled to himself. "It's rather cute, Hardhack." Hardhack was astonished. "Cute?" he said. "Cute?" He grimaced at the Wabbit. "This is a state-of-the-art beast rated at a zillion exaflops." "It has a nice little seat," said the Wabbit. "That is a powerful controller," shouted Hardhack. "It helps execute neural functions equivalent to my Brian." "You mean brain surely?" laughed the Wabbit. Hardhack stuck his nose in the air. "It's what I call my brain," he said. "Only teasing," snickered the Wabbit. Hardhack put his paws on his fur. "Oh you! You're incorrigible. What can I do for you anyway?" He smiled. The Wabbit strode around looking at things. "We've had a big outage. You don't seem affected." Hardhack guffawed loudly. "I wouldn't attach this to the net. Do you think I'm mad?" The Wabbit shrugged. "It's a problem for the Department. I'm supposed to fix it." Hardhack thought for a minute. "You've considered mice." It was the Wabbit's turn to think. "I have not." Hardhack was philosophical "Oh, they talk about faulty configuration changes and backbone routers, but 70% of problems are caused by mice." The Wabbit gave that some thought. "You could be spot-on..."
[Background image by Pixabay]
at October 06, 2021