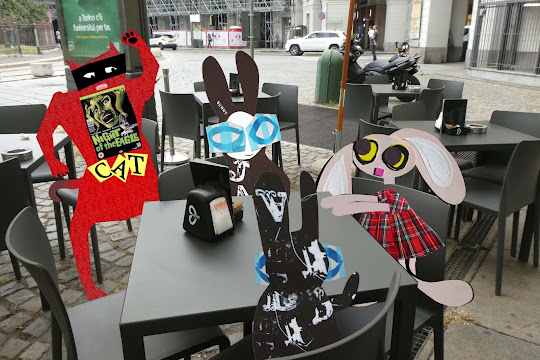 The team gathered in a Caffè near the station. There had been a big fire and they wanted to inspect the damage - but it was all internal and nothing much to see. "I'm glad this place is still functioning," said Lapinette. "Yes, touch and go," replied the Wabbit. The exterior scaffolding was still in place, and they glanced round at it. "I suppose they're still putting it out," said Wabsworth. They sniffed the air. An acrid smell remained. "Blowtorch and insulation?" asked Wabsworth. The Wabbit shook his head gravely. "Just a spark," commented Lapinette. They all nodded. "Oh look! Here's Skratch," said Wabsworth, "He'll tell us what kind of adventure you just had." Skratch's call was long, as he hove into sight. "That was a pleasant adventure," he meaowed. "Nothing more than that Skratch?" Wabsworth smiled and pointed at Lapinette. Then he put both paws to his eyes and then pointed at Skratch. "Hmmm. It was mythological and barely covered by signification," said Skratch. Lapinette smiled. "It was a zone beyond!" "Elusive and ineffable," commented the Wabbit. Lapinette laughed. "You were certainly elusive and ineffable inside that mausoleum." The Wabbit's ears twitched. "No real danger there." Lapinette nearly fell of her chair laughing. Wabsworth laughed too. "The ghost eagle as an autonomous entity is quite a semiotic threat." Skratch grinned. "Where's that eagle now? He seemed clued in on movie history." The Wabbit smirked. "Probably down by the cemetery gate hiring himself out." Lapinette was helpless with mirth. "Then he vanishes after taking the money." The Wabbit suddenly tapped the table. "Talking of vanishing, where's our drinks?" "They're mythological," giggled Lapinette.
at October 04, 2021