8. The Wabbit and the Dark Matter Smell 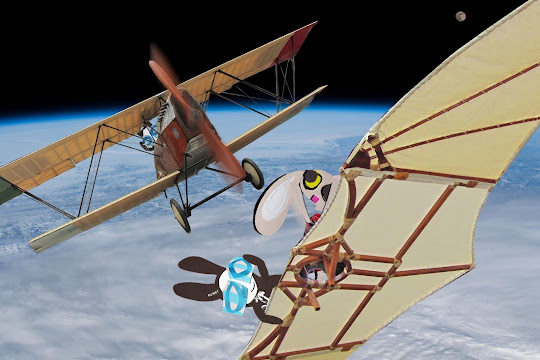 The journey home was uneventful, but the achievements were great. So said Lapinette anyway. The Wabbit still had heartburn even if he had saved his planet. Orni the Ornithopter sailed into the Earth's atmosphere with some satisfaction. Lapinette started to wave and the Wabbit tried to look round - but his neck was stiff from the journey. The engine note was unmistakeable. "It's Wabsworth and Susan!" shouted Lapinette. The Wabbit waved too, although his neck was cricked. Susan wheeled into position to guide Orni in, and together they headed for Torino. "How's your fur, Wabbit?" Lapinette tried to find a comfortable position on the struts. "It's still slightly singed and smells of dark matter," said the Wabbit. He dusted what looked like soot from his fur. "I'm not sure dark matter has a smell," said Lapinette. The Wabbit crinkled his nose, "It smells of sulphur." Lapinette sniffed and nodded. "You're right. It does." Orni laughed. "It's thought to be bare sulphur ions." Lapinette thought that was very funny. "Evil smells like sulphur and venom." The Wabbit shrugged. "That's about 85 per cent of the atmosphere." "Explains all your enemies," laughed Lapinette. "I don't want to go home smelling of rotten eggs," sulked the Wabbit. "The planet will forgive you!" smiled Lapinette. Orni followed Susan on the long flight path that took them closer to Earth. "What do you call that thing your friend is piloting?" The Wabbit grinned. "It's a biplane." Orni dipped his wings, just like Susan. "Maybe I could have a whirling thing at the front?" The Wabbit held his sides and shook with mirth. "You'll need a rubber band!"
[Background image: NASA]
at April 30, 2021