1. The Wabbit has a Chance Meeting 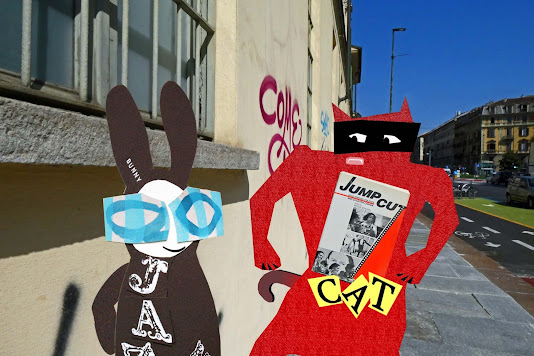 The Wabbit hopped down Via Nizza and was thinking as he tended to do. His brain buzzed with opportunity and he couldn't quite put corners on it. There was so much he could achieve and so little time. He giggled. That was when Skratch the Cat caught up with him. "Hello Wabbit, you look happy." Skratch's meaow was rather suspicious because, in his experience, it was seldom that the Wabbit's demeanour was so relaxed. The Wabbit looked up. "Hello Skratch, I was just thinking of all the wonderful things we can do." Skratch took a step back. "Name one!" The Wabbit became quite rigid. He found he couldn't recollect a single one. He played for time. "It's so nice to be walking in the sun, along Via Nizza." "It's always sunny," said Skratch. "it's summer in Torino and Via Nizza is..." He paused, "Via Nizza is variable." The Wabbit's smile continued. Skratch was alarmed. "Wabbit, have you taken a mind altering drug?" The Wabbit was appalled. "Certainly not." He had a moment's hesitation. "Where could I get them?" Skratch sighed in relief. The Wabbit seemed to be returning to normal, so they both continued to hop down the road. "Do you think we have enough weaponry?" mused the Wabbit. "Plenty," said Skratch, "are we expecting trouble?" The Wabbit dug his paws in his fur. "It's been too quiet for my liking." His ears pricked up as he heard a whispering of gossamer threads. "Now that sounds like Duetta." Skratch threshed his tail. "When Duetta arrives, it usually means trouble on the way..."