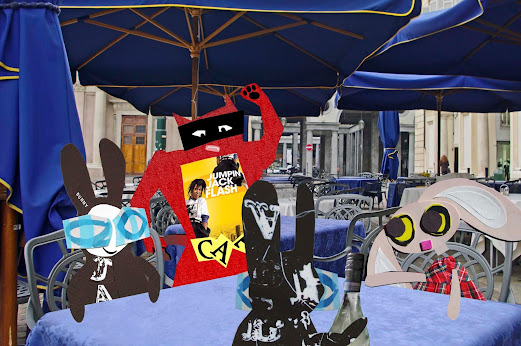 The team assembled at the designated Caffè just off Via Roma. Wabsworth was in fine fettle and had brought a bottle of prosecco. Lapinette looked with amusement. "It's frozen, Wabsworth," she giggled. "Ah yes," said Wabsworth, "I tried my new wine chilling routine, and it went a bit far." The Wabbit laughed and laughed. "We can try blowing on it, speed up the defrost." Wabsworth merely chortled. "We can wait - or order a new one." He held up a paw. "While you're doing that," said Skratch the Cat, "I'll try and explain what kind of adventure that was." His tail thrashed against the back of a chair. "Computeracy as I call it, deals with stories concerning computers, where computers really stand in for toys." The Wabbit leaned forward. "Like puppets?" Lapinette leaned forward too. "Perhaps more like a motif of folkloric transformation?" Skratch purred gently. "That's about it. I haven't forgotten the codes and algorithms though. They stand in for the deception involved in children's games - like hide and seek." Wabsworth took the opportunity to speak. "That's a cultural embeddedness, refracted through our daily interactions with computers and passwords." The Wabbit nodded in agreement. "No longer a commodified object, but a jolly thing with a personality." "Or a devil," said Lapinette. "Or a child!" said Wabsworth. Being an android he had something of a handle on that. "How's that wine going Wabsworth?" asked Lapinette. "It appears to be lightly chilled now," said Wabsworth. "Let's order four glasses!" grinned the "Wabbit.
at April 12, 2021