3. The Wabbit meets his Android Pal 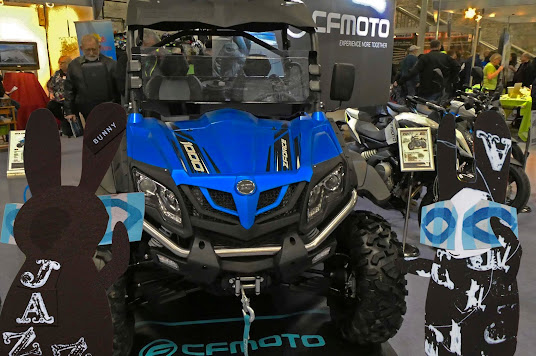 The Wabbit caught up with Wabsworth at the bike show. He wasn't looking at a bike at all. He was standing with a paw on the wheel of what looked like a jeep. The Wabbit gave a salute since they were in public. So did Wabsworth. "Shopping for the Department, Commander?" asked the Wabbit. "You can't have enough wheels," replied Wabsworth. Wabsworth was an android and had catholic tastes. "Are you sure it's bright enough?" asked the Wabbit. "It changes colour to suit your mood," responded Wabsworth. He smiled. "It has a range of shades from livid red to downcast grey." Wabsworth regarded the Wabbit as a trifle conservative in his tastes. "It's very nice as it is," said the Wabbit. Wabsworth kicked the wheels and they both said 'chunky' at the same time. "I've had disturbing cosmological news," said the Wabbit. "Ah!" said Wabsworth, "I was going to send a memo to the Department." The Wabbit looked inside the cab. "I think it's past the memo stage." Wabsworth prodded every switch he could find. "Dark matter is being produced at an alarming rate?" "Lots of it," said the Wabbit. Wabsworth got in and turned on the engine. It burst into life. The Wabbit got in too. "I've been keeping an eye on redshift," said Wabsworth. He revved the engine. "It's hardly ideal." The Wabbit put his safety harness on. "The engine?" "No, the method," said Wabsworth. The Wabbit nodded. "We have to check the whole business." Wabsworth gently eased the jeep forward. "Didn't we have trouble from dark matter before?" The Wabbit grinned. "Hardly matters now."
at April 19, 2021