6. The Wabbit and the Dark Matter Layer 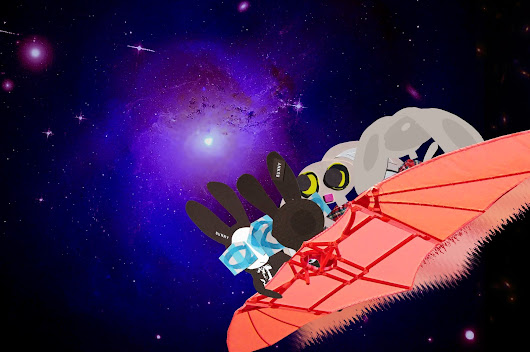 The ornithopter sped on and as it became faster, it became quite crowded. Lapinette and the Wabbit found themselves with an exact double. "Funny things happen near these things," said Orni the ornithopter. It changed colour again. The Wabbit didn't turn a hair. "This happened before," he said, "it was in an old adventure." Lapinette looked straight at her double. "Please to meet you myself," she said sweetly. "Pleased to meet you back," said her double. The ornithopter swung round in a circle. "There's the dark matter, I've coloured it blue. It's hard to spot. "The Wabbit's special glasses let him see the original and he chortled. "It doesn't look dangerous." "Oh, but it is," said the ornithopter, "And there's much more than there should be." They watched the blue haze dance and from time to time they could see pairs of eyes. Sometimes they were multitudes of pairs of eyes. "I remember the eyes," said the Wabbit. "Stay clear of them, they're not really eyes," said Orni. "They're the soul of broken dwarves and they're very very cold." The Wabbit was transfixed. "These are the missing 400 satellites in the Milky Way." Lapinette was a  practical sort. "But how are we going to fix them?" Orni swooped and dived. "We could drain them back into other galaxies." The Wabbit laughed. "Like taking the plug out the bath?" Orni bellowed with laughter. "Which one of you Wabbits came up with that?" Both Wabbits shouted 'Me', and they all laughed. Yet it was the notion of Cold Dark Matter that troubled the Wabbit. He knew that and he spoke quietly. "So much Dark Matter, so little time." "We need a plan," said Orni. "Then we'll need Planning Permission," quipped the Wabbit.
[I'm indebted to "The Big Deal about Dwarf Galaxies: The role of Dark Matter" by R. Jay Gabaney]
at April 26, 2021