6. The Wabbit and the Meaning of Life 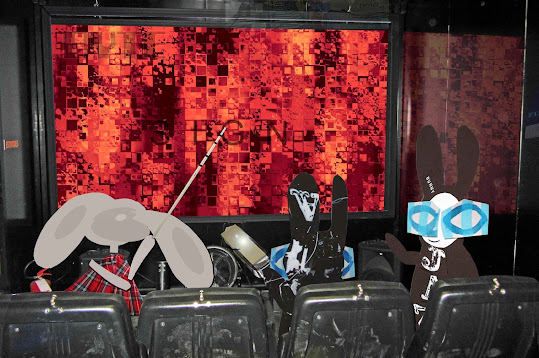 The Wabbit's viewing theatre was formerly in Via Nizza but when it went up for sale, he bought it and moved it, brick by brick. The Department paid. It had become a talking point and as such, could hardly be refused. The Wabbit made one change. It now boasted a state-of-the-art digital cinema projector. Wabsworth scanned the old copy of Byte magazine and using the flash drive, projected the selected page. When they enlarged the page, there it was. Hidden amongst the pixels was a single word. The Wabbit shook his head like a donkey. "'Sign' is hardly a very good password." Lapinette laughed. "It doesn't have to be. It's repeated several times on each page in different formats." Wabsworth cleared his throat. "Any attempt to get closer will bring catastrophic catastrophe." The flash drive laughed. "I told you so." The Wabbit looked stern. "You said it would explain the meaning of life." "That is the meaning of life," replied the drive, "it's as close as you get. Il n'y a pas de hors-texte, so the meaning of life can only be what's left." Lapinette grinned. "Skratch the Cat should be here." "I'll give him his own preview," scowled the Wabbit. Lapinette asked flash drive to keep the old copy of Byte magazine safe - in case anyone unsuitable found it. "What should we call you, we can't keep calling you flash drive." The USB detached from the digital cinema unit. "Jack," he said. "Why Jack?" asked the Wabbit - although he had a clue what he was going to say. "Jumping Jack," came the reply. "He's a gas gas gas." added Wabsworth.

[ Il n'y a pas de hors-texte. From Derrida. "There is nothing outside the text."    Pixel image by by Gerd Altmann at Pixabay]