2. The Wabbit and What the Spider Knew 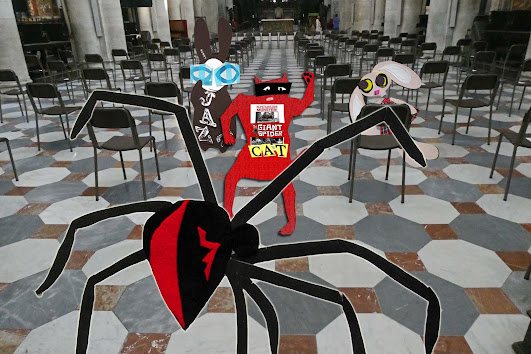 They met with Duetta at the Cathedral of St. John. The Wabbit had an arrangement with the Cathedral and no-one was around - just a few pilgrims to see the Shroud of Turin. But Duetta was hard to ignore. Lapinette had forgotten how huge the spider was. She jumped in the air and all her fur stood on end. Skratch was first to greet Duetta and he stepped forward with all the courage he could muster. "Greetings Marshall Duetta Spyder. What brings your illustrious presence to our humble church?" Duetta rattled her legs. "Less of the feline flannel, Skratch. This is an important mission." Now the Wabbit hopped forward and saluted. "Marshall." Duetta replied with a squiggly salute. "Commander, a matter of common interest has come our way." There was an intake of breath that everyone could hear. Then she began. "As you know our view of the universe is different from yours." The Wabbit waved his paw in a squiggly motion. "For six months south constantly, for six north the sun goeth." Lapinette chimed in. "Ordaining the days and nights, like a cunning spider." Duetta laughed. "You have it in a walnut. The universe is a matrix of geo-celestial rhythms. But something has happened to upset the rhythm." Skratch wasn't going to be left out. "Bark is not smooth and lightning does not travel in a straight line." Duetta looked at him and her eyes bored through his skull. "But it's becoming so. Imperceptible yet inescapable." Lapinette looked at the Wabbit and the Wabbit looked back. "We have to check. I'll get Wabsworth on it right away." Duetta rattled as she bowed. "Your android is a wise one and no mistake." The Wabbit grinned. "Don't tell him, we'll never hear the end of it."
[I'm indebted to Harriet Witt for the idea. Here's the link to her article.]
at April 16, 2021