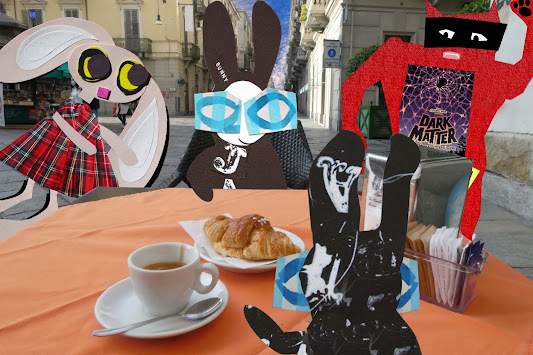 The team assembled as usual. Wabsworth arrived first and was already tucking into croissants and coffee. Skratch was late was usual and hove up from behind. Lapinette arrived from ballet class. The Wabbit stood up to offer her a seat - but not before his paw snaked out to nab the croissant. "We should have arrived in a different order," meaowed Skratch, "but perhaps that Dark Matter Adventure affected everyone." The Wabbit choked on his croissant. Lapinette sat down with the grace of dancer. "Now that you're here Skratch, you can tell us what kind of adventure we had." Skratch purred mightily and everything shook. "Simple. You had an eco-space adventure." Wabsworth nodded his head. "Such a story is about the unconscious and hidden objects." Lapinette squealed with delight. "Dark Matter is so hidden we can't see it." The Wabbit chipped in. "A primal scene wish-fulfilment fantasy in which the obsessive quest for origins is demonstrated." Skratch nearly howled with delight. "In that sense, all our stories are of the unconscious! But it's a purposeful look at what is there, rather than what is absent." Lapinette pulled herself up to her full height. "Not to mention the penetrative aspect of space voyages. The infant is conceived and separated from the mother. All is revealed." Skratch became contemplative. "Yet at the same time, what the story is about - is repressed. What it is represses What am I? Wabsworth chuckled. "That's deep, Skratch." Rumbling sounds came from deep inside the Wabbit's tummy. "I'm hungry!" he yelled.