4. The Wabbit sends up Drones 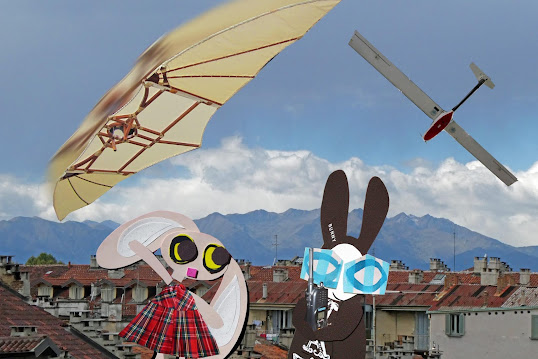 Up on the Torino rooftops, the Wabbit practiced with inventions of his own. He stabbed at an adapted walkie talkie. The ornithopter bat swooped and dived. He switched to another channel and this time he swiped. The other bird was a traditional drone and it swooped too. Lapinette arrived and hopped with delight. "What are you trying to find, Wabbit?" The Wabbit looked up. "I'm checking the dark matter question." Lapinette watched the drones for a while. It was somehow relaxing. "I'm looking for wimps," said the Wabbit. Lapinette's eyes shot up but the Wabbit continued. "One drone is filled with small pendulums, all deflecting in response to dark matter tugs." "And the other?" asked Lapinette. "It has small spheres which gravitationally jiggle," replied the Wabbit. He grinned. "It's largely a question of jiggling balls." Lapinette pondered for a second. "What about anyons?" "They just won't behave themselves, when you square the wave function." The Wabbit was pulling her leg of course. "It's largely a matter of topology," said Lapinette in self-defence. "The anyon is two dimensional just like us." The Wabbit was delighted. "Then anything goes. We have a chance of solving the problem." He sent the ornithopter swooping over the city. "Go my beauty, go" Lapinette followed the drone it as it dipped up and down. "Who adapted the walkie talkie?" "Wabsworth," said the Wabbit, "He can't explain what's happening with dark matter." "Neither can I," said Lapinette. "I must go or I'll be late. You know how the universe keeps expanding." The Wabbit slapped a paw to his brow and groaned as she hopped off.