4. The Wabbit and the Encryption Set-up 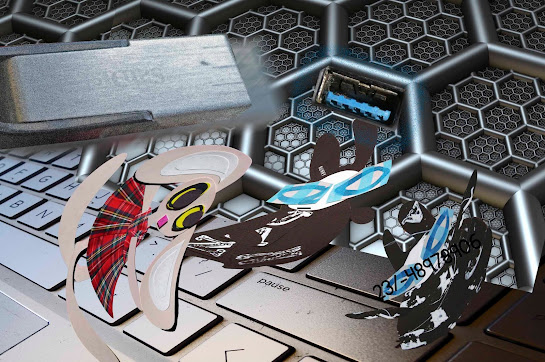 They followed the flash drive until the basement. That was where it all happened. A keyboard appeared beneath their feet and a metal honeycomb slammed down, cutting it in half. A USB slot with a blue glow shone from the centre as the flash drive moved to dock. They lost their footing as they were pulled close to the slot in the honeycomb. "What's happening, Wabsworth?" The Wabbit was closest and didn't like it. Lapinette followed him, pulled by an enormous force that twisted her arms and legs. Wabsworth let himself go - but he was listening as a stream of characters passed in front of him. He memorised everything. "I think it's best to let go Commander." "We've hardly any choice," said the Wabbit. The Wabbit noticed the drive had nearly docked and he wasn't surprised when it was the wrong way up. It reversed and this time docking was successful.  He smiled. "Maybe that's the password to the meaning of life?" speculated Lapinette. Her frock flattened against the honeycombs. "I wouldn't be surprised," muttered the Wabbit. They were flat against the hexagon, just like on the wall of death. "Honeycomb over here!" shouted Lapinette to the Wabbit as she blew him a kiss. But the Wabbit was in no mood for jokes. He shouted to the flash drive. But the drive had more important business and it made a faint sound as it completed data transfer. "Do you remember Byte magazine," yelled Wabsworth. The Wabbit signified that he did. "Didn't that come with a bottle of vodka?" Wabsworth grinned. "That's where the password is now."
[Honeycomb by Pete Limford at Pixabay]
at April 05, 2021