7. The Wabbit and the Tiny Red Giant 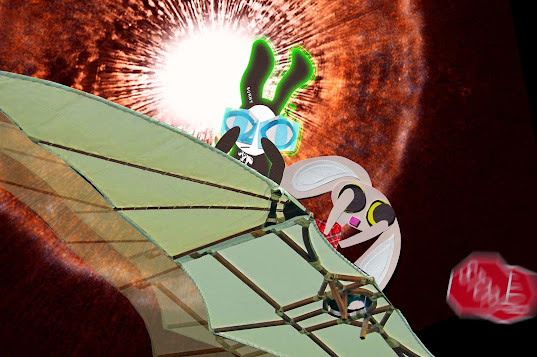 Orni the Ornithopter took off once more and they hurtled through space. The Wabbit was relieved there was only one of him and Lapinette, but that was the least of his worries. Orni steered a course towards a star. "U Cam is one bright star," said Lapinette. She shielded her eyes and so did the Wabbit. " It's a Red Giant," he said. He cringed because he knew what was coming. "Get ready," said Orni. "That gas shell is going to blow," yelled the Wabbit. Orni swooped closer. "Your suit will channel it - and the dark matter." The Wabbit's fur stood on end. It was exactly what was needed because his fur acted as both a shield and a magnet. Dark matter poured through the Wabbit and into the space of Camelopardalis Galaxy. The Wabbit flinched. He felt the energy. It gave him heartburn. "Is Camelopardalis short on dark matter?" he breathed. "Far too bright in my opinion, even if the star is tiny." Orni gave a sarcastic sigh. Lapinette was stunned but knowledgeable, quite aware of where they were. "This galaxy has a double star, Cam," she said. "Has it indeed?" said Orni, "shall we double down?" "No," said the Wabbit, "there's such a thing as gilding the lily." He still had heartburn and his fur gave off a faint smell of cordite. He pointed. "What's that stop sign?" Lapinette grinned. "I imagined it." Orni was most impressed. "The power of thought." He laughed so hard they nearly fell off. The Wabbit was miffed. "This galaxy doesn't look like it's supposed to." His long explanation ended in, "It's not a giraffe or a camel. Nor is it a leopard." Orni chortled. "The Chinese call it Purple Forbidden Enclosure." "I prefer giraffe," shrugged the Wabbit.[Credit: Background:  ESA/Hubble/ NASA and H. Olofsson (Onsala Space Observatory)]
at April 28, 2021