5. The Wabbit and the Ornithopter's Flight 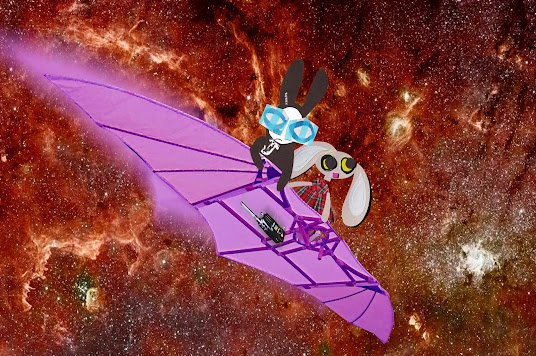 When the ornithopter returned it had grown bigger and was changing colour like a chameleon. It came closer and closer and swept both the Wabbit and Lapinette into the air. "Whoa!" yelled the Wabbit. Lapinette gave it a pat. "Why don't you do your thing Orni?"  The bird swept round in a circle. Then with increasing speed, it soared high until it left earth's atmosphere. "I didn't give authority for this," yelled the Wabbit. Lapinette ignored the Wabbit's shouting. "I expect you can speak," she said. "I generally speak Bird," said Orni, "but I can do many other tongues." Lapinette patted the Wabbit on the paw and he dropped his radio. "I've lost my control board," he scowled. Orni cackled rather like a Magpie. "I can't be controlled." "Well you were before," sulked the Wabbit. "I was humouring you," smiled Orni. She flew faster and faster. "We have common interests. Dark matter is one of them." They came to a stop in a strange zone. "This is the core of the Galaxy you call the Milky Way," said Orni, "We'll start here." They looked around. "Dark matter is the reason rabbits can breathe in space." The Wabbit suppressed a giggle. "Frankly, I'd always wondered." The Wabbit was being disingenuous. He knew his fur was made from special material, but seldom let anyone know. "It looks vast," said Lapinette, "but where are we going?" Suddenly everything vanished to a pin prick and then expanded into something extraordinary. "We're at the edge of a black hole but there's no event horizon," said Orni. "I was hoping there was going to be a show," moaned the Wabbit. Lapinette was miffed. "It's not black and it's not much of a hole." "Everyone's a critic," said Orni.
at April 24, 2021