5. The Wabbit and the Shaking Down 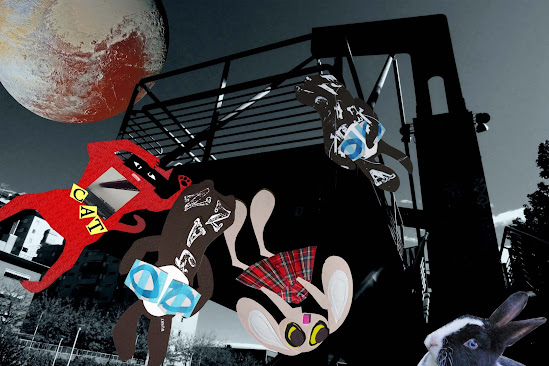 They just couldn't hold on. The bridge started to shake, and they were catapulted down like so many skittles. "Whoa!" yelled the Wabbit. He could see the ground coming up and it looked hard. He engaged his special coat to soften the blow. Lapinette was more confident in her agility and she started to roll. Skratch was a cat and he could cope with most things. He twisted and turned and ended up the right way. All the same it was a surprise. Wabsworth fared worst of all since he was an android and not really built for maneuvers in the air. His arms flailed and he prepared for a crash landing. Somehow, he engaged his g-force circuitry and gradually managed to move round. Lapinette found herself looking at a rabbit. The rabbit looked at her and said, "I am the Bunnyman." Lapinette twisted and landed on all fours. "You don't look like the Bunnyman to me." The Wabbit was close behind Lapinette - then came Skratch, then Wabsworth. They stood and faced the rabbit. "Where's your axe?" The rabbit smiled and opened his paws. "I have no axe. That's all piffle. I can shake things though." Without moving, he shook the bridge until it threatened to collapse. "I get the drift," said the Wabbit, holding up his paws. "But what about that?" He pointed at the planet, which had replaced the Moon. "You call this Pluto Park don't you?" said the rabbit. "I changed it for one of Pluto's." He snuffled a bit and blinked, and it was the Moon again. "Aha!" said Wabsworth, "You're a conjuror and you came out of a hat." The rabbit nodded. "I confess, I am from a famous painting." Lapinette was curious. "Where's the conjuror?" "I left him behind," said the rabbit. "I can't abide conjurors. I put him in the hat."