6. The Wabbit and a Spot of Bother 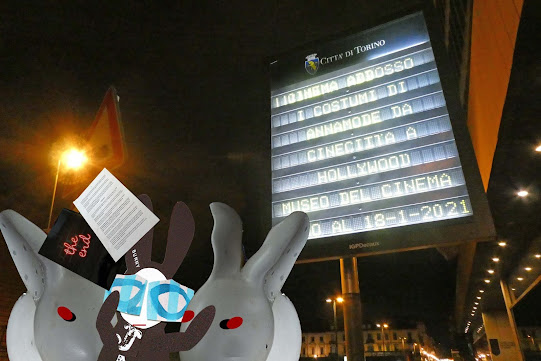 On the advice of the Magician's Rabbit, the Wabbit drew up his catalogue and he was on his way home with the draft. The evening was pleasant. A gentle breeze blew along Via Giovanni Giolitti and it ruffled the Wabbit's fur. "I'm very pleased to get this finished," murmured the Wabbit to himself. An art catalogue was a tougher proposition than he had imagined. He really wasn't expecting trouble, because art was hardly a controversial matter. Or so he thought. But a shape loomed up behind him - and then another. "There he is," said a voice. "Let's get him," said another. The shape shoved up against him and buffeted him to the left and then the other buffeted him to the right. He could see now they were two giant rabbits he had never seen before. They were trying to get the catalogue, but the Wabbit wasn't going to let them have it. They pulled him one way and then another. He held onto the catalogue like grim death. "Leave off or I'll give you trouble," he yelled. He bashed one of them in the eye and there was a yelp. The other he elbowed in the nose and there was another yelp. A frantic scrabble took place and pages of the catalogue flew in the air. "That took me all day!" yelled the Wabbit, "pick them up you ruffians." The giant rabbits turned and fled. The Wabbit went around picking up the pages. The breeze wafted along the street and the Wabbit chased them up and down. Finally, he tracked the last page down. It was stuck to a litter bin with a candy wrapper. The Wabbit peeled it off. "It's all wrapped up now," he joked. But who were the two giant rabbits? What did they want? They had certainly taken him by surprise. "The fast and the furriest," mused the Wabbit.
at November 04, 2020