4. The Wabbit and the Make Up Session 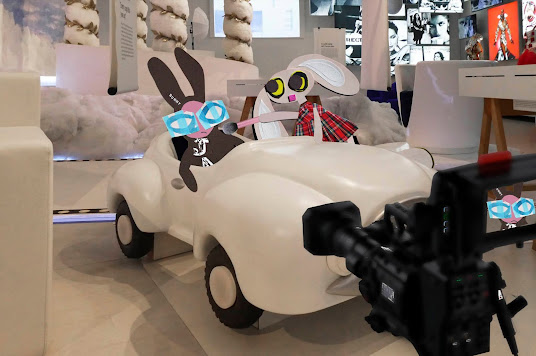 Ignoring the advice of Skratch the Cat, the Wabbit decided to go along with the Rabbit of the Year Award. It was vanity that persuaded him in the end. He thought to himself, "What if some awful rabbit got it?" That's how the Wabbit came to be experiencing a make-up session in the paws of Lovely Lapinette, and she was very much in charge. The Wabbit squirmed under the lights. Lapinette brushed on some sort of foundation, but the Wabbit wriggled and fidgeted until something unexpected happened. His face became quite a distinct shade of puce. "I'm having a reaction!" he yelled. "Stay still, Wabbit - it's all your own fault." Lapinette wasn't finished and she said so in no uncertain terms. "I look like Carlo Conti on acid," gasped the Wabbit. "It will all be all right on the night," sighed Lapinette. The Wabbit spluttered. "And what am I doing in this awful car? I should be in my jeep." Lapinette sighed again. "This is a set for Carmencita, the famous animation character, you should be pleased we got it." The Wabbit scowled, "J'aime pas les marionnettes!" "You know that's not true, Wabbit," shouted Lapinette, "now sit still!" The Wabbit settled back. Gradually his face returned to a kind of normal and he spoke. "Skratch the Cat says this is all a moneymaking exercise." Lapinette flounced. "Skratch the Cat has not been nominated for Rabbit of the Year." The Wabbit's face creased into a smile. "I'll be very pleased when we can all go back to normal." Lapinette gave a short laugh. "What kind of normal is that?" "Abnormally normal," said the Wabbit.