2. The Wabbit and the Monster Show 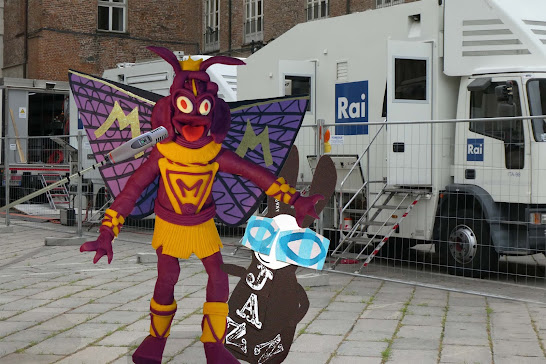 The Wabbit spotted Moloch near Porta Palatino and hurried to catch him. But Moloch was standing stock still and talking into a microphone held by a camera crew from the state broadcaster, RAI. The Wabbit took little notice and strolled straight in front of them. He tapped Moloch lightly on the knee. "What's happening Moloch?" he yelled. The camera crew gave up at that juncture and Moloch looked down at the Wabbit. "Wabbit, your interrupting my interview. Kindly desist." The Wabbit grinned and waved the camera crew away. "We'll come back later, Moloch when your friend is finished," said the journalist with a sigh. The Wabbit tapped Moloch on the knee again, "Spill the beans, Moloch!" Moloch's chest expanded. "I'm being interviewed for the Monster Show." The Wabbit was taken aback. "Why is there all this interest in the team?" he murmured." "What interest?" said Moloch. "I've been proposed for the Rabbit of the Year," said the Wabbit. "Oh really, I'm a judge for that but I'm not supposed to tell you," said Moloch. "Why not?" asked the Wabbit. "You might lobby me unfairly," replied Moloch. "Wouldn't dream of it," smirked the Wabbit. He thought for a minute. "You'll support me of course." Moloch was appalled. "I need to be absolutely fair," "It is fair," said the Wabbit, "I'm clearly the best contender. I support you for the Monster Show, you support me for the Rabbit of the Year." The Wabbit considered the matter a little more. "Let's take advice on the matter." "Who from?" asked Moloch. "Someone who know his way around these things," smirked the Wabbit. "Skratch the Cat?" smiled Moloch.
at November 16, 2020