7. Lapinette and the Grand Finale 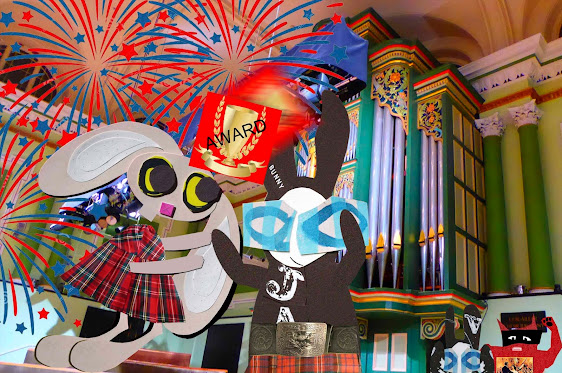 Lovely Lapinette opened the folder and waved it around. The audience went completely mad. She shielded her eyes from what was written inside. "It's what you've all been waiting for!" she yelled. "It's the Rabbit of the Year!" She unshielded her eyes. "It says the Rabbit of the Year is ..." Her voice was unsteady. She couldn't believe what was written there. "Lovely Lapinette?" She looked across the audience and they were ecstatic. "It looks like ... it's me," she gasped. The Wabbit grabbed her paw. The band started to play "She's a Winner," by the Golden Jazz Band. Fireworks exploded overhead. Lapinette leapt in the air. "It's me, It's me, it's me!" The Wabbit detached his paw to applaud. To the delight of the audience, Wabsworth and Skratch the Cat came on stage. They too applauded wildly. "Couldn't go to a nicer rabbit," said Skratch. Wabsworth nodded in agreement. Lapinette tried to compose herself. "But I didn't know I'd been nominated," she said. "It was apparently all a last-minute affair, but completely within the rules," said the Wabbit. "I wonder who?" smiled Lapinette. The Wabbit wasn't giving anything away. "Nominations are of course, confidential." He suppressed a smile. Lapinette pirouetted for her adoring fans. "How can I top this?" she sighed. "With a champagne reception," said the Wabbit. "There's carrot canapes and all manner of goodies backstage." The Wabbit took her by the paw once more. "You have to sign autographs, me first." "Where shall I sign?" said Lapinette. "I quite forgot my autograph book," grinned the Wabbit. "I'm sure I'll find somewhere," smirked Lapinette.
at November 27, 2020