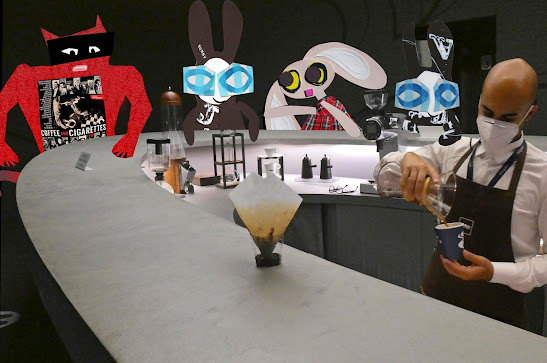 The team gathered at the Adventure Caffè and for once it was a proper coffee bar. The barista wore a mask since COVID flu had ravaged the land, but it didn't stop him making perfect coffees. This was the coffee bar in the Lavazza museum and they were looking forward to trying the new blend. "It's a good thing we're cartoons," said the Wabbit, "or we might get this flu as well." Camilla flounced a bit. "Oh never mind all that. Let's be cheerful." Wabsworth was watching the barista with interest and he spoke out the corner of his mouth. "Tell me Skratch. I was wondering what sort of adventure we just had." Skratch meaowed forcibly. "It was an open adventure." Lapinette looked sceptical. "By which you mean it didn't have a proper ending?" Skratch purred for a long time. "Hardly. The story wasn't sufficient to produce narrative irresolution or ambiguity." Wabsworth continued watching the coffee being made. "No, it wasn't a tactic for producing narrative delay. The ending was secure and systematic." Lapinette paused and looked at the Wabbit. "So. What did you do with these guys anyway?" The Wabbit smirked an evil smirk. "I sent them for severe chastisement." "That's very biblical," said Skratch. The Wabbit was highly amused. "No, I just boxed their ears and sent them on their way." Wabsworth was astonished. "Where did you deliver the box to?" "Not literally, Wabsworth," said Lapinette. The Wabbit reached under the table. "I have the ears here. In a box." "Eeek!" cried Lapinette. She buried her eyes in her paws. "Only joking," said the Wabbit. Skratch moaned, "Where's this coffee?"  Wabsworth leaned forward and tapped the barista on the shoulder. "Hurry up or this will never finish!"