7. The Wabbit and the Rabbit Provenance 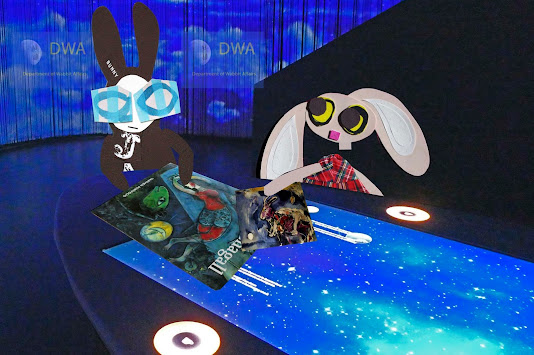 The Wabbit tried to figure out what interest his attackers had in his art catalogue and together with Lovely Lapinette he repaired to the Department's new Map Room. It was a nice space with plenty of room for both maps and thinking. He threw down the art book on the vast table. Lapinette had brought something along as well. "The answer is here," said the Wabbit. "And it has something to do with this," added Lapinette. She produced a copy of The Dream, The Rabbit - an early work by Chagall. The Wabbit nodded his head. "Is there any chance that we have the real picture?" Lapinette considered very carefully and tried to remember her training in European art. "Copies are so good these days that there is a chance it was substituted. Experts can be fooled. Where did you get the copy?" The Wabbit laughed. "In a market in Paris from an old Jewish fellow who looked like Methuselah." Lapinette wrinkled her nose. "It's supposed to be in the Museum of Modern Art in Paris." The Wabbit winked. "Mine is under lock and key in my shed." Lapinette flicked through the book. "The Dream, The Rabbit is not in in here." "It wasn't as popular as his later works," said the Wabbit. "Probably because there was a rabbit in it," sighed Lapinette. "Rabbit exclusion everywhere," grunted the Wabbit. "When's the catalogue coming out?" asked Lapinette. "Monday," said the Wabbit, "and it's listed as an oil and canvas reproduction. Very highly priced. Very." Lapinette hopped round the table three times. "We'll see who comes for it." "I suppose I'll have to check their credentials," smiled the Wabbit. Lapinette's paw felt for her automatic. "I'll do the checking."
at November 06, 2020