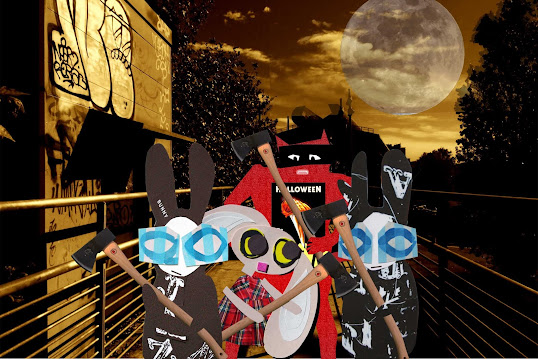 It was a spooky night out at Pluto Park and up on the bridge, the Wabbit clutched his axe to his chest. He wasn't going to be outdone this year. He bellowed out for all to hear. "It is me who is the Bunnyman. Me! There are no others." But he heard a scuffling behind him. It was Lapinette. "No, that's not true. It is me who is the Bunnyman. None come before me and never have." She waved her axe threateningly. The wind whistled through the park. A translucent blue moon looked down. There was a noise from behind her and she turned. "I'm afraid you're wrong, Lapinette. Because all along it was me. It is Wabsworth who is the true Bunnyman." Wabsworth waved his axe too. Yet it wasn't over. The sound of a ferocious meaow that went on forever, hung over the park like a serrated sword. "I am Skratch and I am the Bunnyman who cut up his victims at Bunnyman bridge. The blood of the Bunnyman is in me." The temperature dropped and the Wabbit shivered. "There can only be one Bunnyman," he moaned. "Lapinette scowled. "I am the Bunnyman!" Skratch meaowed from the back. "I am the Bunnyman!" Wabsworth joined the chorus. "I am the Bunnyman!" They all stood their ground but the Wabbit was the first to give in. "Look it's all a joke, there's no Bunnyman. He doesn't exist." They all started to laugh. But their laughing quickly died. They staggered as something shook the bridge with force. Their blood chilled as the sound of a stick rattling along the railings drifted through the night air. It was then that they heard the harsh groaning voice. "I am the true Bunnyman and you're standing on my bridge ..."
at October 31, 2020