3. The Wabbit and the Awards Game 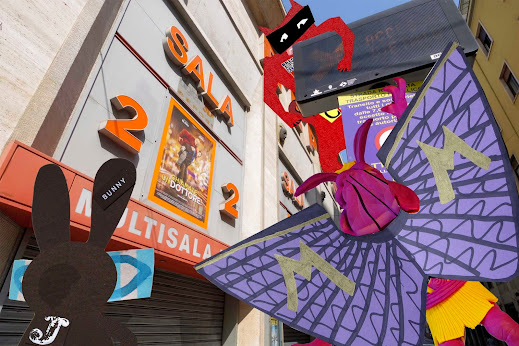 The Wabbit and Moloch caught up with Skratch at the cinema. He was doing something with a sign and Wabbit waved up to him. "He's caught up a post," said Moloch, "I'll help get him down." The Wabbit shook his head and shook with mirth. "He's a cat, Moloch. He needs no help." Nevertheless Moloch jumped up and shook the post with vigour. "It's OK Moloch," said Skratch, "I'm just repairing this sign. It was incorrectly signifying the signified." Moloch was disappointed. He'd always wanted to rescue a cat from a tree. Now he'd been deprived of his opportunity. "Let me know when you're coming down," he yelled. "I'll be sure to do that," purred Skratch. "Skratch, we need your advice," said the Wabbit. Skratch paused and rested his paws for a second. "Fire away," he said. "It's rather embarrassing," said the Wabbit. "I'm the most discreet cat I know," meaowed Skratch. The Wabbit began a long explanation. "I want to support Moloch and his Monster Show. In return he'll support my nomination for Rabbit of the Year." Skratch purred long and loud. "I'm not sure you're Rabbit of the Year material," he said. The Wabbit looked relieved. "I thought you might say it was unethical." "No-one cares about that," said Skratch, "it's all fixed in advance." The Wabbit didn't know what to say. Moloch said it for him. "I heard the Monster Show was the same." Skratch agreed vociferously. "I get invited to the Cat of the Town every year - but every year I decline." The Wabbit couldn't get his head round this. "Because there's a whopping fee," said Skratch, "and the prize always goes to some Felix or other. Who's in the Monster Show?"  "Godzilla," said Moloch. "Aha," said Skratch. He jumped down from the sign and shrugged. "Then I rest my case."
at November 18, 2020