5. The Wabbit and the Practice Session 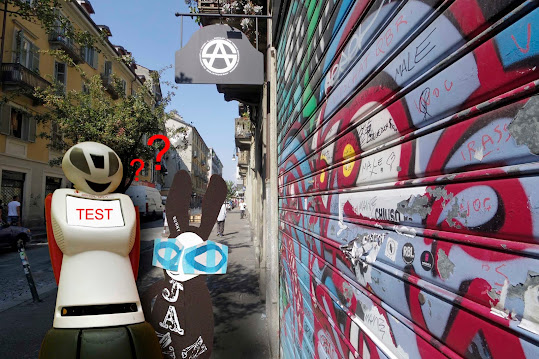 Robot had been employed by Lovely Lapinette to coach the Wabbit on likely questions he would get when he appeared in the Wabbit of the Year Competition. There were a vast range to choose from and they were always tricky. "Now concentrate, Wabbit," said Robot, "think flexibly, think on your paws." The Wabbit smirked. "I usually do," he said. He did a little jig. Robot looked offended. "It's really not that kind of thinking, more like an idiot would think." The Wabbit was amused. He knew what Lapinette would say if she were here. Robot launched in. "What would you tell a child who asked you if Santa Claus was real?" The Wabbit didn't hesitate. "I'll tell him he's as real as me." Robot hooted with laughter. "That's the spirit Wabbit. Let's do another. If you had an elephant and couldn't sell it or give it away, what would you do with it." The Wabbit puts his hands on his hips. "I'd arm it to the teeth and make war on the Carthaginians." Robot scowled. "I'm not sure everyone appreciates your sense of humour Wabbit." The Wabbit was quite happy. "Perhaps I'll lose. Ask me another." Robot was beginning to feel stressed. "How many square feet of pizza are eaten in Turin each year." The Wabbit swiftly replied, "None whatsoever, they'd be measured in square meters." Robot sighed and went for an awkward question. "If you were a tree, what music would you like?" The Wabbit grinned. "That's easy. Reggae ... because I'm strictly roots." Robot knew it was time to give up. He patted the Wabbit on the shoulder. "Don't worry Wabbit, you're bound to be a hit."  The Wabbit didn't know what to think but he was cheerful. "Maybe they'll offer me a show of my own?"
at November 23, 2020