6. The Wabbit and the Big Ceremony 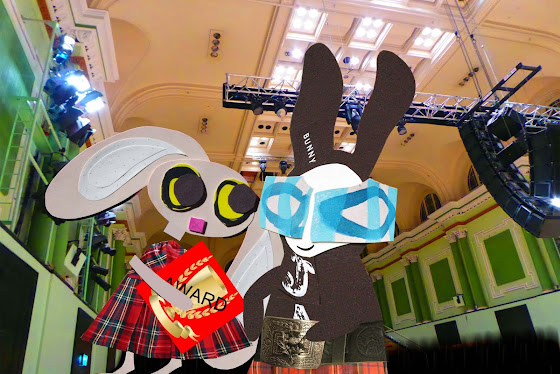 It was the night of the Award Ceremony and the atmosphere was electric. The audience assembled and they were rather noisy until Lapinette called for hush. Under her paw she held the results. All she had to do was open the folder and read out the contents. The Wabbit was resplendent in his kilt. Lapinette had darned the moth holes like the best invisible mender and ironed each pleat until it was immaculate. He placed his paws on his belt and rolled his tummy out. The band began to play triumphal music and a loudspeaker blared out the procedure. The Wabbit quipped to Lapinette. "This won't take too long will it? I said I'd meet Wabsworth and Skratch for a quiet game of cards." Lapinette knew the camera was cutting in - so she was safe to stamp on his foot. The Wabbit groaned. "Mind my Ghillie Brogues, they're not paid for." Lapinette grinned and turned to face the audience. "Thank you all for coming. It's going to be such a wonderful evening" She held up her folder. "I have the results here. I know you've all been waiting with bated breath." The audience cheered with vigour. The Wabbit noticed Skratch and Wabsworth and Moloch creep onto the balcony. The audience noticed them too and clapped in spontaneous applause. The band broke into a Horace Silver jazz classic, How did it Happen? The Wabbit nodded approvingly.  Then the music faded, and the audience fell silent. Lovely Lapinette lifted the folder high in the air. She brought it down slowly and began to open it. "Everyone that's getting an award is written down in here. Are you ready?" The audience screamed and yelled. Lapinette opened the folder. "And the Rabbit of the Year is ..."
at November 25, 2020