1. The Wabbit and the Wabbit of the Year 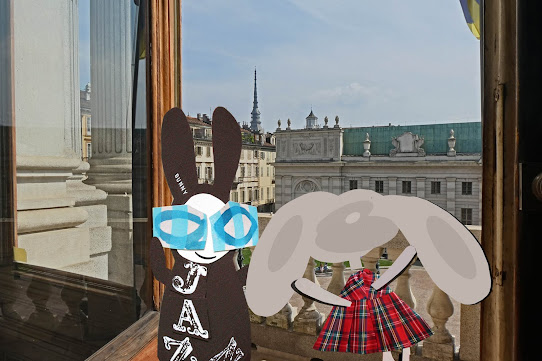 The Wabbit strolled back from his balcony at the Department of Wabbit Affairs. It was a mite chilly but warm in the sun and his fur felt good. All of a sudden, Lovely Lapinette poured herself through the door. "Wabbit, I have exciting news." The Wabbit waited to hear what it was. His definition of exciting was rather different from most people, but he smiled. "Lovely Lapinette, I wasn't expecting you!" Lapinette looked overjoyed. "You've been nominated for Rabbit of the Year!" The Wabbit secretly grimaced because he hated that sort of thing - and everything that went with it. "What are you going to wear?" shouted Lapinette with glee. The Wabbit had no hesitation. "My kilt," he shrugged.  Lapinette scowled. "The moths got it; you'll need a new one. And you need the whole outfit, sgian dubh the lot." The Wabbit grinned. "Don't worry, it's all wrapped in a protective cover in the back of the wardrobe." Lapinette was all cheerful again. "You'll need your fur trimmed." The Wabbit brushed his paws up and down his fur. He thought it looked OK, but he shrugged again. "Where is this Rabbit of the Year presentation?" Lapinette span round in a pirouette. "Location yet to be determined." "And the date?" continued the Wabbit. "Sometime next month," grinned Lapinette. The Wabbit breathed a sigh of relief. It all sounded a bit vague, so he had some time. Perhaps he would be called away urgently. He felt cheered. "What if I win?" he ventured. Lovely Lapinette gaped. "You? You're a normal brown rabbit, you'll never win. But there will be a gala dinner. Everyone that's anyone will be there." Now the Wabbit was miffed. "Is there anyone I know that's up for it." Lapinette shook her head. "It's all secret. No-one is supposed to know, so don't tell anyone." The Wabbit smiled a secret smile and Lapinette saw it. "Wabbit - don't you dare!"