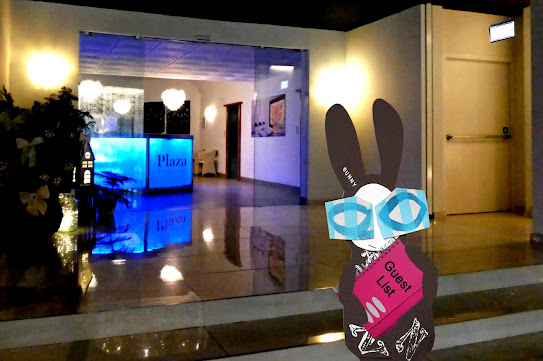 The Wabbit made his way to the Hotel Plaza, which was in a part of town he didn't know well. He wanted to ask for the Guest List. He figured all the homicide victims were booked in one hotel and, as it happened, they were. He stood at the desk for a while. No-one came. "This is a fine to-do," he muttered. "I'm not coming here on holiday." He waited and waited. It was absolutely deserted with not a soul around. No waiter passed. No bellboy emerged. But the thing he was looking for was on the desk in front of him. He looked each way, then flicked it open. All the names were there and a few more beside. "Tsk tsk," said the Wabbit. Then in a stentorian tone, he announced his presence. "Commander Wabbit, Department of Wabbit Affairs." No-one emerged. "I'd like to borrow your guest list for the Conference on Flights for Small Mammals," he yelled. Silence. The Wabbit flicked through the contents once more and there was one thing that he found interesting. So he scribbled a receipt, and tucked the book under his fur. Then he hopped down the stairs and out of the building. He made his way to a caffè, where he took another look at the book. "I have to figure the murderer is here," he said to himself. There were a lot of names - experts on this and experts on that.  There were keynote speakers in great number. And there was to be a special welcome by the President of the Chamber of Commerce himself. "Why wasn't I invited?" asked the Wabbit. He mused for a while. The Wabbit disliked conferences intensely, but that didn't stop people inviting him. So he nodded to himself with an impish grin. "I have an idea."
at August 31, 2020