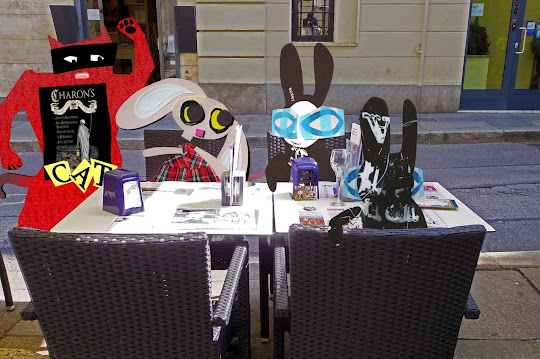 The four gathered at the Adventure Caffè. Skratch was late but arrived before things got going. "Hello," he purred, "I hope you haven't decided what's what." Lapinette shook her head. "Certainly not. Now that you're here you can say what kind of adventure the Wabbit and Wabsworth had." Skratch purred mightily. "First, let me say what a pleasure it was to see little in the way of Sphynxology and Pharoahnicity." Wabsworth nodded with vigour. "Can you say a little more about that, Skratch." Skratch was delighted. "Charon and his obol doesn't really figure much in Ancient Egypt. He was more a product of Greek mythology." The Wabbit chipped in. "What about he who faces behind him and to the front at the same time,' in the Pyramid texts." Lapinette wasn't going to be left out. "What about the boat that wasn't there?" Wabsworth knew what all this was about. "I call that myntle, but that's a translation from hieroglyphics and hard to pronounce." Skratch shook his head. "There are said to be three names for the celestial ferryman." The Wabbit was becoming bored. "Huey, Dewey and Louie?" Skratch laughed and gave up. "Yes," he said. "OK," said Lapinette, "We have to call for the ferryman!" Skratch was already standing and lifted a glass. "To the luminal area of ordeal!" "What's that?" said Wabsworth. "When are the drinks coming?" said the Wabbit.
[Skratch is indebted to "The Celestial Ferryman in Ancient Egyptian Religion - Sailor of the Dead" by Dr.Radwan Abdel-Rady Sayed Ahmed]
at August 22, 2020