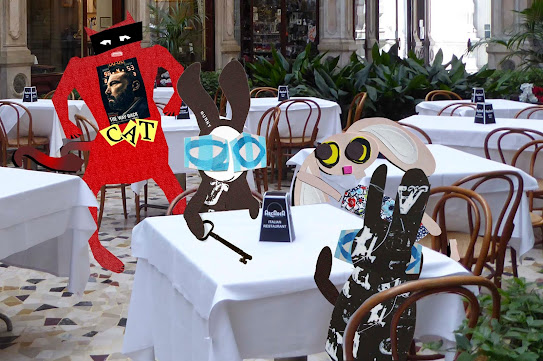 The Wabbit found the gang at the arcade. They were sitting round speculating whether he'd got lost. "How long have I been away for?" he asked. "Just overnight," said Lapinette. "Seemed like longer," replied the Wabbit. He started to relate his story. No sooner had he begun, when Skratch arrived late as usual. "Carry on," he said, "I picked up most of it." The Wabbit smiled. "Yesterday evening I was walking near here, when I touched an object and it took me on a trip." Everyone wanted to know what kind of trip it was, and the Wabbit explained the ins and outs of the entire journey. "I'm left with this key," said the Wabbit. "So it's not the end of the journey," suggested Skratch. The Wabbit was hardly impressed. He knew that already. "But what kind of a journey was it?" He effected a gentle tone of enquiry. Skratch paused for maximum affect. "The story does appear to be a descriptive open discourse - but one which requires no particular closure." Wabsworth butted in. "I think it merely tells of the personality of the Wabbit in a non-linear way." Lapinette grunted and gave a grudging smile. "I think the Wabbit was more in the realm of the documentary there." The Wabbit leaned back. "That's all very well, but what is this key for?" Lapinette studied it. "It looks like a smaller version of an old key. One that was in a previous story." Skratch laughed, "What did you do then Wabbit?" The Wabbit grinned. "I tried putting it in every lock I could find." Lapinette grinned mysteriously and winked. "Better start then ..."
at August 03, 2020