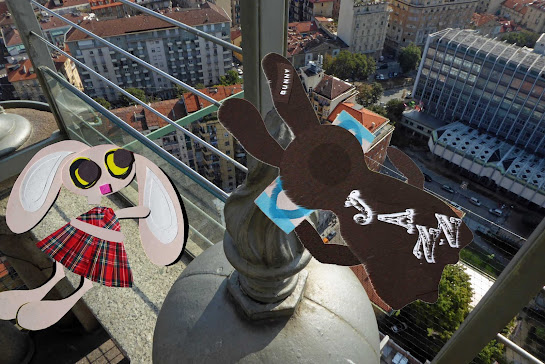 "Whoa," yelled the Wabbit. He was perfectly capable of this manoeuvre, but he hadn't factored in the wind at the top of the Mole Tower. Lapinette was at her assigned meeting place but hadn't expected anything dramatic. "Left hand down a bit," she yelled. The Wabbit did exactly that but it looked like he as going to hit the big round candle thing. "Yikes," he said as he careered past it and into Lapinette's waiting arms. With his feet on terra firma, he could afford to be nonchalant. "I thought I'd take the scenic route," he said. Lapinette smiled just a little bit. "I didn't know you were coming by biplane." The Wabbit smirked. "This way I don't pay." Lapinette gently reminded him that he had an annual pass to everything in the city and this was part of everything. The Wabbit stifled a malicious grin. "I forgot." Lapinette pretended to be annoyed. "Some way to treat a bunny, this is." The Wabbit had settled now and ignored this badinage. "I like to make a dramatic entrance." Lapinette folded her paws. "One of these days you'll plaster yourself across the pavement and be - an art exhibit." The Wabbit's laugh was hollow because one day he had missed. He'd been forced to use his special powers to get out of it and the whole business was a dreadful embarrassment. He'd bribed the doorman to keep it quiet - so he changed the subject. "Anything from the Department?" "There is, as it happens," said Lapinette, "something right up your street." The Wabbit grinned eagerly and Lapinette continued. "It demands cunning foolhardiness allied with pig headedness." The Wabbit put up his paw. "I'm your rabbit."
at August 07, 2020