6. The Wabbit and Charon's Desire 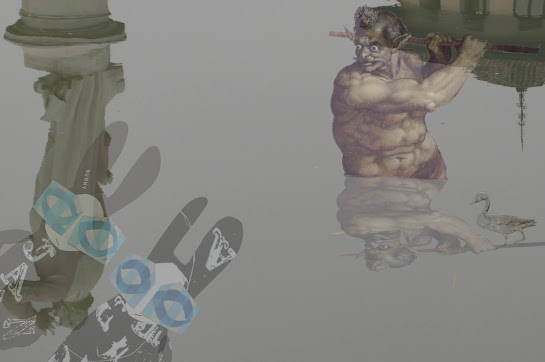 The Wabbit and Wabsworth gazed into the depths and watched Charon float upwards. The bird sat calmly on a reflection and seemed to find some humour in it. "What ho Charon?" it said, "I have two passengers for you." Charon glared. "Call these passengers?" he roared. The Wabbit was steadfast. "Two returns," he said, "and by the way - what happened to the rest of your oar?" Charon wrinkled his nose. "Michelangelo didn't make it long enough I'm afraid." "Well just for that," said the Wabbit, "we shall travel half price." Charon turned to the bird. "Comedians everywhere." The bird spoke in Charon's ear. "Better take the money before they change their minds." Charon turned back and said with a superior smile. "Just this time." Wabsworth chose his moment to speak. "You're supposed to be the ferryman, yet I see no ferry." "It's all the rage and it cuts down on overheads," said Charon. The argued about various details, then agreed to be carried across on his back. Charon snorted twice, then turned so that they could fit on his broad shoulders. "How far is it?" said the Wabbit. "Depends," said Charon. "On what?" asked the Wabbit. "On what kind of life you think you lived," responded Charon. Wabsworth chortled. Being an android copy, he had all the memories of the Wabbit and then some more of his own. The Wabbit interrupted his reverie. "What do you say to exploiting this place?" Wabsworth's android circuits were momentarily overloaded, something only the Wabbit could do. "Hades Holidays?" he said at last. "Underworld Excursions," replied the Wabbit. "That's been tried before," laughed the bird.
at August 17, 2020