4. The Wabbit and the Colourful Corridor 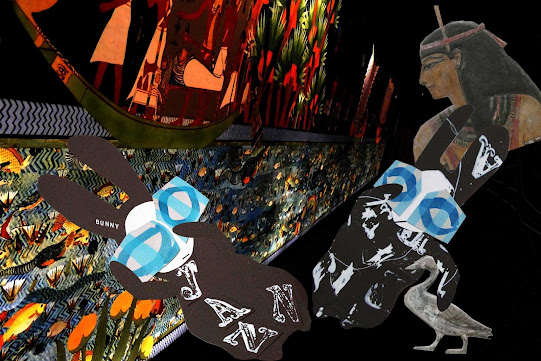 It was a long slide. The Wabbit and Wabsworth found themselves in a long corridor which seemed to be decorated with Egyptian artefacts. "Ouch," said the Wabbit who had landed on his bottom. "Yikes," said Wabsworth. He seemed to be upright but had acquired a pal. "Squeak squawk," said the bird. Wabsworth was heavy and had landed on top of him. "Where are we?" asked the Wabbit. "I have no idea," said Wabsworth. "Well you designed it," said the Wabbit. Wabsworth shook his head. I didn't design this bit." The Wabbit scrambled to his feet and pointed. "Who's your friend?" Wabsworth was confused. "I have no idea. Let's ask him." They both turned to the bird, who took another step back and spoke in a high squeaky voice. "This is the Tunnel of the Gods. We have oil, ointment, snacks, board games - including cross hieroglyphs - I have everything you might need on your way to the Afterlife." A little while elapsed. Wabsworth decided to be first to state the obvious. "We're not actually going to the Afterlife." This time the bird took a step forward. "Well you must be, since you're here." It was the Wabbit's turn. "We got in here by mistake, we're just visiting." The bird looked confused. "You're not dead then? You have to be dead to get in. I am your guide." The Wabbit thought about it. "You mentioned snacks. Have you got a salad sandwich?" The bird looked relieved. "Come this way," he said. "As long as your dead," he added.
at August 12, 2020