1. The Wabbit and the Body at the Kiosk 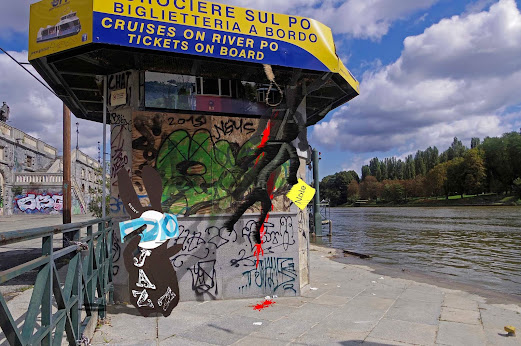 The Wabbit was between adventures and at an early hour in the morning he was lazing around at the old abandoned kiosk. It was a deserted place now since the boats had long gone, destroyed in a summer storm. They had never been replaced. He kicked his heels and rummaged through his fur for something, anything to do. That was when he heard the splat. It was a soft kind of splat, nothing much. Then it became an insistent splosh. He looked down and saw blood. "Rio Bravo!" he exclaimed. He looked up and pulled out his automatic. A body toppled forward. Then it fell in slow motion to the ground. It seemed to take an age. The Wabbit looked at the crumpled heap. The crumpled heap was a very dead rabbit and it held a crumpled note. The Wabbit took a step backwards because he thought it might be a trap. But his curiosity overcame caution and he crept forward, automatic at the ready. He dislodged the note with his foot. If there was any message written on the note it was on the other side. He turned it over with the barrel of his gun to see what there was - and indeed there was one. There were only two words. "More coming." The Wabbit bent forward and looked at the body. "More of what?" he wondered, although he already knew. He searched the body for clues, but there were none. No ID, no personal items, no money, nothing. He leaned back against the fence and breathed a sigh. "More of this kind of trouble."
at August 25, 2020