5. The Wabbit and the Ferryman's Obol 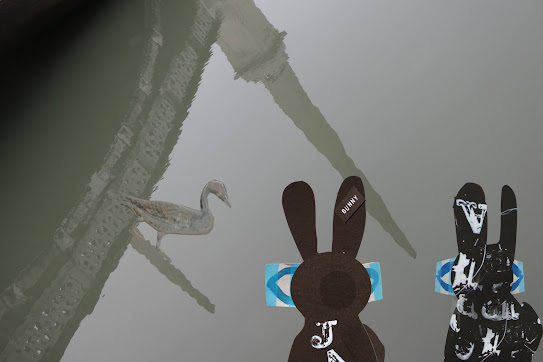 "Where's my sandwich?" asked the Wabbit. "All in due course," said the bird. The Wabbit was going to argue but Wabsworth dug him in the ribs. "But what's this place," he asked. "This is the Stxy," explained the bird, "and you can have the sandwich when you pay the ferryman." The Wabbit wasn't happy because he couldn't see the ferryman. "Where is he?" he asked. "He's on his lunch break," said the bird. The Wabbit's tummy began to rumble. Wabsworth thought this was a bad sign because the Wabbit could get bad tempered and make a fuss. "I expect he'll be along in a minute," he said and he looked around. "He will," said the bird, "and he will expect paying." "Paying!" exploded the Wabbit. "The fee is one Obol," said the bird. The Wabbit dug in his fur and rummaged for a bit. Then he brought out two coins and handed them over. "Wabsworth gasped. "You have Obols in your fur!" "Of course I do," said the Wabbit with a frown, "you never know when they might come in handy." He paused for a moment. "Otherwise we might roam as ghosts across the land." Wabsworth shook his head. "We certainly don't want to do any roaming. Not today." The bird called for attention. "It's Charon! Here he comes now." In the distance they could see an unkempt figure with unclean hair and blazing eyes. He carried a mighty oar and they watched as he shambled into sight. "I don't like the look of him," said the Wabbit. "Sordid," agreed Wabsworth. The Wabbit paused for an instant. "Doesn't Pluto have a moon named after this fellow." "Oh yes," said Wabsworth, "It's got a big red spot from Pluto." "So that's why he's bad tempered," said the Wabbit
at August 14, 2020