5. The Wabbit and the Sudden Attack 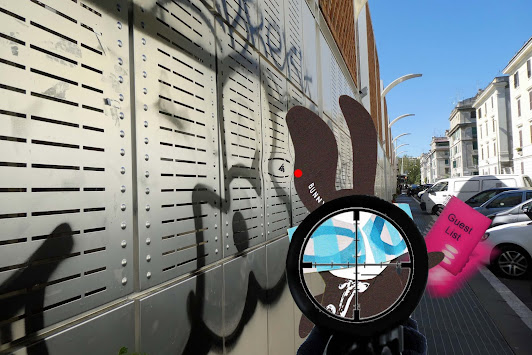 The Wabbit took a short cut along the side of the market because he wasn't sure when the attack would come. He knew there would be one - but of its exact shape he had no clue. So it wasn't entirely unexpected when it happened. When he saw a red dot appear he shifted like a cheetah running from extinction. He swayed to the left and then to the right, just as a rabbit does. He heard a sharp crack but the bullet went wide and hit the sidewall of the market. There was no second shot. Clearly the attacker had expected an easy hit and had now vanished, Nevertheless, he dropped down on all fours and looked all round for the attacker, but there was no sign, Just the mark of the bullet on the aluminium plate. The guest book was on the ground so he picked it up, shot to the other side of the road and round the corner. Clearly, he was close to the murderer and the murderer wanted the book. He clutched it against his chest and then flicked it open again.  He ran his eyes over the names of the three murdered rabbits and tried to think. The wind rustled the leaves of the book and turned the pages. There on the fourth page was the name of the next speaker at the conference, It leaped out at him. He looked familiar. The Wabbit snapped the book shut and stealthily went on his way. He didn't think the perpetrator would make a second attempt so soon. He was too smart a mammal for that. All the same, the Wabbit thought reinforcements would be a good idea at this stage. Keeping a wary eye open he stuck close to the buildings in the shadows, and made his way across town,
at September 04, 2020