2. The Wabbit and the Second Strike 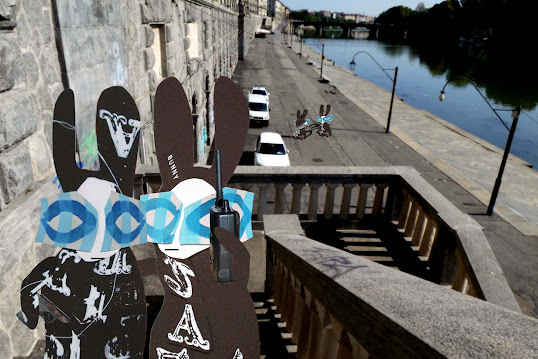 The Wabbit called in Wabsworth and a small forensics team. The team lurched towards their cars with the body, only dropping it twice. This was accompanied by a lot of shouting until the Wabbit looked a back and scowled. "It's a mystery all right," he said to Wabsworth. "He looks like an Agent of Rabit," said Wabsworth. The Wabbit shook his head. "I don't think he is." He told Wabsworth about the note. Wabsworth looked sceptical. "It could be a trick." The Wabbit shook his head again. "Just a feeling." "I don't like it," said Wabsworth, I don't like it one bit." He took out his automatic and rubbed the grip. "I'm expecting trouble and I'm going to be prepared." The Wabbit's radio crackled. It was Lovely Lapinette. "We found a body," she said. "Snap," said the Wabbit. "It looks like an Agent of Rabit," she continued. "So did ours," said the Wabbit. There was silence for a minute until the Wabbit asked, "Where did you find him?" Lapinette's voice was a shrug. "We found him drowned, half in and half out of the water." The Wabbit paused and glanced at Wabsworth, his eyes in the air. "Anything else?" "Yes," said Lapinette, "There was a note." The Wabbit heaved a sigh. "Let me guess. It said to expect more bodies." "No," said Lapinette, "it asked if we were keeping count." The radio crackled with another call. "This is Wabbit command," said a voice, "Someone's found a body." The Wabbit grimaced and switched to Lapinette. "Any advance on three?" he said.
at August 26, 2020