7. The Wabbit and Carrot Transportation 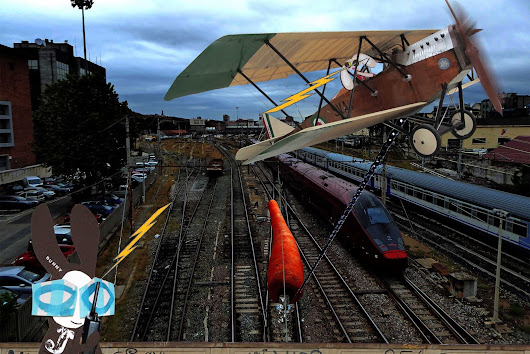 The effect of the cosmetics was soporific and very quickly the carrots fell fast asleep. That was when the Wabbit had one of his bright ideas. Soon Lapinette and Susan the Biplane were airlifting the carrots, one by one, to the railway. It was the Wabbit's plan to place the carrots on bogies and have them hauled to Parma Freight Village. In his opinion, only in Parma would they would know what to do with over-large talking carrots. In Susan's cockpit, the talk was racy. "Swing that carrot over!" shouted Lapinette. "And lay that carrot down," yelled Susan. She lowered a massive carrot gently onto one of the outbound tracks. Commuters gawped from a high speed train, but they know the ways of the railway were strange indeed and shrugged. The Wabbit saw Wabsworth gesticulating down on the track and he muttered into his walkie talkie. "Left paw down a bit" The radio crackled and whined. "I'm quite used to handling big red carrots," said Lapinette's voice. Susan waggled her wings and released the hoist. The first carrot crashed down on the tracks. Now Wabsworth's voice crackled over the radio. "That carrot nearly hit my foot." Now the Wabbit's radio hissed and hummed. It was Lapinette, cutting through the static. "Did you know 2019 is the Year of the Carrot?" The Wabbit laughed. "I don't carrot all."
at May 08, 2019