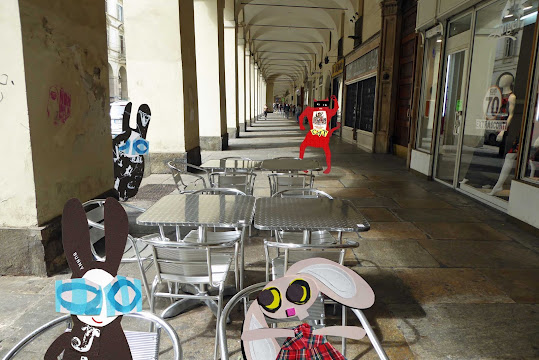 The team gathered at a caffè on Via Po. It was very quiet. Normally Via Po hustled and bustled - so they were pleased to find a space at a basic caffè, knowing that often they were the best. The Wabbit and Lapinette were first. Before long they heard frantic sounds. Skratch's meaows could be extremely loud and they bounced like bad cheques along the porticos. "What was that for a sort of adventure you just had?" Lapinette turned and meaowed back. "You tell us, Skratch. It's your job." Wabsworth jumped from a tram and stuck his head round a pillar. "I'll tell you if you like!"  The Wabbit waved for everyone to sit down and he called for drinks. Despite his android nature, Wabsworth was in a cheerful mood. "It was strictly comedy and driven by expectation." Skratch grinned an encouraging grin. "The audience feels superior because it knows the introduction of a banana to the plot is automatically funny." Lapinette raised a paw. "The audience recognises the incongruity of the banana as a sign. The banana stands for light hearted madness."  Skratch meaowed long and hard. "The banana is the essence of genial abnormality." The Wabbit gave him a meaningful look. "But what about the vague allusions to the Banana Boat Song?" Skratch laughed. "References to the idiocy of cultural appropriation." The Wabbit nodded gravely. "That's something that drives me bananas."
[Thanks to :  HumorMechanisms in Film Comedy: Incongruity and Superiority, Jeroen Vandaele, Poetics Today, 23:2, CETRA, Leuven]
at May 28, 2019