3. The Wabbit and the Yellow Menace 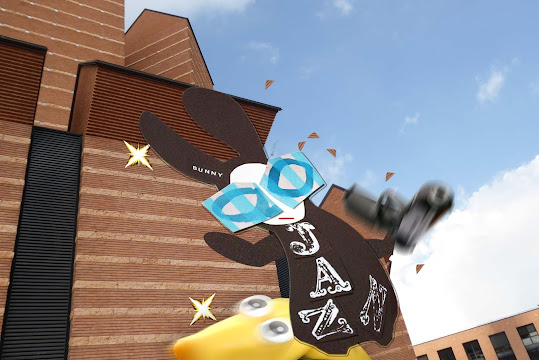 The scuttling creature doubled back and took the Wabbit by surprise. It got under his feet and he lost his balance and flew in the air. His automatic flew out of his paw. He bounced from the wall and then crashed on the ground.  But the creature hadn't finished. It got under his feet again. The Wabbit slipped, turned a cartwheel, then somehow got up straight. A bullet flew past and hit the wall behind him. He felt pieces of brickwork spatter his fur. The creature slid up his leg and got into his fur. Then it slithered up the wall and back. He could smell it and it smelled strange. "It smells like ... a banana," thought the Wabbit. But his foot went from under him and he bounced from the church stairway. Now he'd cut his leg and he was angry. There was another shot so he crouched on the paving.  But still the creature kept coming. A bullet grazed the yellow skin and the creature yelped. That was when it bit him. The Wabbit growled as he kicked the creature as hard as he could. It skidded along the paving and then disappeared round a doorway. He heard Lapinette calling. "I'll get him!" He heard more shots. Massaging a painful leg, he groped along the paving for his automatic. Then he tucked it in his fur and tumbled through the door, yelling, "Leave some of him for me!"
at May 19, 2019