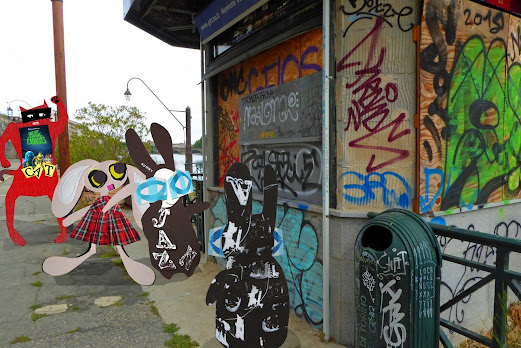 The team met with the Wabbit at the Caffè he'd selected and then stood back in horror. "This place is closed," said Wabsworth. "I've never known it open," said Lapinette. The Wabbit grinned long and hard. "I was thinking of buying it." Everyone burst out laughing - including Skratch who was arriving late as usual. "It's awful," meowed Skratch. "Exactly," said the Wabbit, "And that's exactly how we'll market it." "Did he say 'we'?" asked Wabsworth. The Wabbit waved his paws in excitement. Lapinette sighed, but the Wabbit continued. "We'll open when no-one is really looking - and then when they do take a look it will be closing." Skratch hissed. "Ah. You mean to catch the in-crowd!" "Yes," shrugged the Wabbit, "but we won't let them in." Wabsworth let out an android guffaw. "People will flock, Wabbit. You missed your vocation." Skratch purred in agreement. "That's all very well. But maybe you'd like to know what kind of adventure you just had?" Lapinette cheered. The Wabbit joined in. "It was primarily a discourse of otherness," meowed Skratch. Lapinette wrinkled her nose. "Otherness is a problematic concept. Use of otherness is designed to threaten and frighten." Wabsworth chipped in. "That's alterity. It's a common phenomenon in all societies." The Wabbit nodded his head. "Every other is truly other. But no other is wholly other." "That's Derrida!" yelled Lapinette. "Derrida was other," laughed Skratch.
[The philosopher Derrida is considered the founder of deconstruction as a method of critiquing texts and institutions.]
at May 12, 2019