2. The Wabbit and the Quantum Lift Off 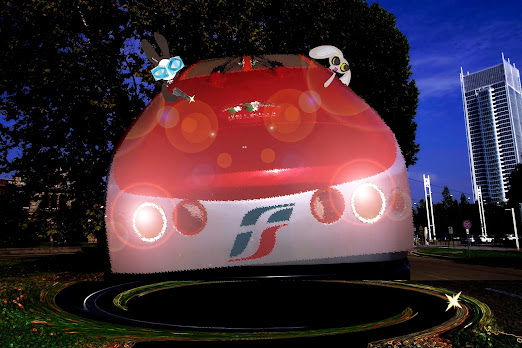 The Wabbit and Lapinette raced across the city. They figured off-planet was a good place to be and they were relieved to find Quantum the Time Travelling Train ready and waiting. They scrambled aboard. Quantum seemed to have a clue about what was happening. "No sign of life, Commander."  "Nary a thing," said the Wabbit. "Nothing moves across the whole city," confirmed Lapinette. Quantum's engines came to life. The train vibrated. "What about the team?" asked Lapinette. "Skratch and Wabsworth are in the engine room," said Quantum, "and the rest are in the restaurant car." The train shuddered and lifted. The intercom crackled. "Engaging Lattice Drive," said Skratch. Nothing happened. The train hung a meter from the ground. The Wabbit and Lapinette looked out and down. The ground danced and swirled in circles. "I'll shoot it!" yelled the Wabbit. "That's your answer to everything," said Lapinette. Skratch's voice crackled. "Why don't you try, Commander?" The Wabbit fired a single shot at the ground. Quantum shook and pulled upwards. "Again," said Skratch. The Wabbit fired again. The swirls spread. The force weakened. "Get your heads back in the cab, you two," said Quantum, "or you'll be pulled into the space time continuum." "Does it have a bar?" asked the Wabbit. Engines throbbed. The train shook. There was a flash. If anyone could have watched they would have seen a big red train dissolve into pixels - and vanish.
at May 31, 2019