1. The Wabbit and Target Practice 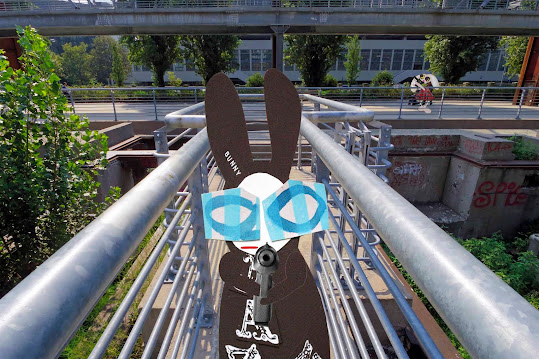 The Wabbit was between missions and as usual he was bored - although he preferred to think of it as being ennuied. The term had more of an existential ring to it - and in consequence, he felt marginally better. Pluto Park and a bit of target practice would banish ennui and bring him to a state of existential dasein. He lifted his automatic and looked down the barrel. "I'll be in the world," he thought, "and experience the temporality of existence." Using a dead rabbit's paw shooting deck and a steel target for safety, he lined up carefully and fired several shots. All of them hit the designated targets and made a healthy ping. The Wabbit shrugged. Another wave of ennui swept over him. The Wabbit seldom resorted to weapons, but he did enjoy weaponry skills. He sighed, because on this occasion he needed more of a challenge. He lifted his automatic again, then just as he squinted at the target, a shot rang out from behind. He swung around to see Lapinette fire several rounds from her own gun. He couldn't make out a target. Whatever was there was well hidden. He heard her call out, "Get down Wabbit!" and he dropped as a bullet whistled between his ears. He sprawled on the concrete, but the park was open with little cover. The Wabbit scowled. "When I said target practice, I didn't mean me!" He saw Lapinette hopping up a flight of metal stairs onto a walkway and he heard more shots. So he hunched down and loped as fast as he could in pursuit ...
at May 13, 2019