2. The Wabbit and the Upper Heights 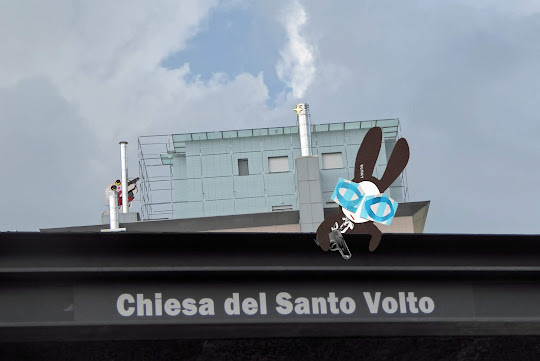 The Wabbit saw no sign of Lapinette from the walkway, but he could hear sporadic gunfire. So he climbed to the roof of the Santo Volto Church. It was a cumbersome climb. Despite everything he accomplished it with speed - but just as his paw reached over the parapet, another shot rang out. His head swiveled. He caught sight of Lapinette firing at something or someone on the roof of an adjacent building. A bullet ricocheted from a chimney and then Lapinette vanished. The Wabbit hopped to the edge of the church building and judged the distance. He shook his head. Even if he made a super jump he knew he couldn't reach the opposite roof. There was no option but to drop to ground level and hare across Via Nole. He was just about to return the way he came when he heard a noise and another shot. The sounds were getting closer, so he decided to stay where he was and watch. Something scuttled across the church courtyard. It was fast and the Wabbit couldn't really see what it was - but whatever it was scuttled back. Now the Wabbit could make out Lapinette edging round the corner of the church. He saw her run in pursuit. The Wabbit shrugged and dropped over the edge to a window halfway down. Then he jumped the rest, shrunk into the brickwork and waited.
at May 15, 2019