4. The Wabbit and the Stealthy Banana 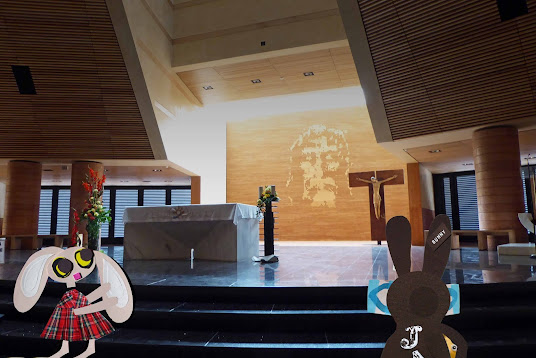 The Wabbit entered the church but of the banana there was no sign. He could see Lapinette - and although she appeared to be kneeling in reverence at the altar, she was looking all around. The Wabbit spoke in a hushed voice. "What's the deal with the yellow thing?" Lapinette was still, but ever watchful. She spoke in a low tone. "It's a banana and it's out of control." The Wabbit grinned. Lapinette frowned. "It's been tripping people all around the city." "Very annoying," whispered the Wabbit. Lapinette sighed. "It nearly caused a major accident at the Porta Susa Bridge Club." The Wabbit felt his insides shake with mirth but he held it in. Lapinette continued. "There was an incident at the Sardinian's Gramsci Club and several participants were disturbed at the Octogenarian Writing Centre." "That won't do," agreed the Wabbit. He cast around to locate the offending banana. Lapinette was staring at the face on the wall. "The face! I saw the eyes move." The Wabbit shrugged and drew a breath. "For goodness sake, don't tell anyone. The place will be completely mobbed." Lapinette kept staring at the eyes. They were definitely moving and she followed their direction. "There's the banana!" "Where?" asked the Wabbit. "On your fur," shouted Lapinette. "Aaaagh!" yelled the Wabbit. His paws flailed and the banana streaked out of the church.
at May 20, 2019