6. The Wabbit and the Spider's Banana 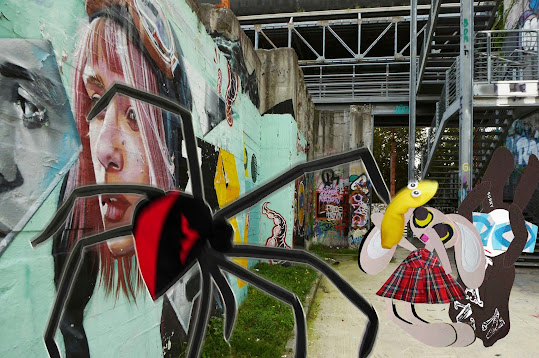 The Wabbit and Lapinette chased across the city in pursuit of the banana and it brought them right back to Pluto Park. Just when they thought they'd cornered it, it kept slipping from their grasp. It ran them ragged across the whole place and when things finally looked like success, they were exhausted. The banana however remained unflustered. "Where's Duetta?" yelled Lapinette. "I'm here," said a voice. Marshall Duetta Spyder rounded a corner and watched with amusement. "That's my banana!" Duetta rattled her legs. The banana danced wildly in the air. Lapinette made one last attempt to grasp it, but there was no need because the banana settled on one of Duetta's legs. Then Duetta began to sing a song. "Well I'm loadin' de banana boat all night long." The banana sung too. "Dah dah light and me wan' go home." Duetta rattled and responded. "When I get some money, gonna quit so soon," he sang. The banana stretched, relaxed and went to sleep. Lapinette gazed at the sight. "Your banana?" Duetta hissed and cackled. "Every spider should have a banana." The Wabbit tried to sound stern. "That banana caused a lot of trouble." Duetta shuffled to the side and back again. "OK. I'll take responsibility for the fruit." "You better had," said Lapinette, "he's driven us bananas." The Wabbit grinned with all of his 28 teeth. "Now I feel like going on a bender. So let's split."
at May 24, 2019