5. The Wabbit & the Flight of the Banana 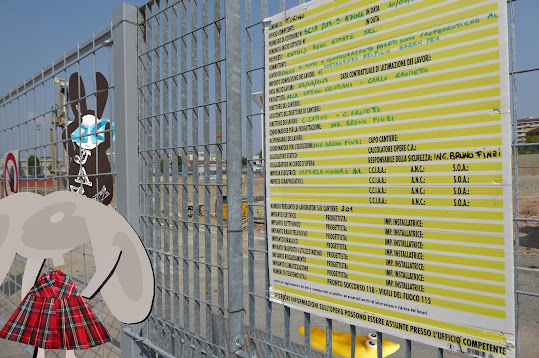 The Wabbit and Lapinette were up at daybreak to continue the search for the disordered banana. They'd had a call about a sighting from Eataly, the food concern at Lingotto - and round the back they spotted it. It was squirming under a fence and into a building site. It was moving fast and seemed intent on something. The Wabbit scaled the fence and began to drop down the other side. Lapinette stayed where she was in case the banana decided to double back. The Wabbit muttered a curse as he snagged his fur on a spike. "You need your safety helmet!" joked Lapinette. "And boots and Day Glow fur," smirked the Wabbit. The banana scuttled along the fence, taking them both by surprise. "It's almost as if it wants us to follow it," observed the Wabbit. "What in the world for?" murmured Lapinette. "What do bananas really want?" laughed the Wabbit. "Their own Republic?" suggested Lapinette. The Wabbit dropped down the fence and dusted his fur. Then he watched the banana explore the building site. It poked in every corner and crevice. It slithered into heavy plant vehicles and out again. Finally it climbed a mound of rubble and sat at the top. The Wabbit shrugged. "No-one around to trip up?"  Lapinette nodded. "Look Wabbit, this shouldn't be difficult. It's only a one banana problem." The Wabbit thought for a moment. "Then let's call Duetta the Spider. Spiders know all about bananas."
at May 22, 2019