3. The Wabbit and the Dragon's Flames 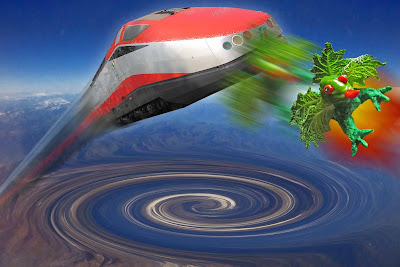 The jump was shorter than expected and they all looked out to see the Alps swirling in a spiral. Terni the Food Dragon emerged from the south and flew directly in front. They could hear his cabbage wings flapping, even at this altitude. "What gives?" muttered the Wabbit. "What happened to Lattice Drive?" asked Lapinette. Skratch's voice crackled from the intercom. "Best we can do, Commander." Then Terni chimed in. "Everything is swirling," he roared, "I just got ahead of it." Quantum's engines shuddered, entangled in forces that no-one understood. "I'm going to the engine room," said the Wabbit. He vanished. Lapinette spoke to Terni. "Any ideas?" They were going round in circles and dropping in altitude. Terni flew under Quantum and spread his wings as far as they would go. It seemed to help. Quantum lifted and the grip of the swirling spiral loosened. Lapinette clapped her paws in glee. The Wabbit reappeared. "Something worked," he grimaced. Lapinette nodded at the window. The Wabbit watched in astonishment as Terni's wings drove them higher. "What is this? Game of Thrones?" "All we need are flames," said Lapinette. In an instant Terni created a sea of flame that pushed Quantum higher. "We have full power!" yelled Skratch. The Wabbit signalled to Terni. "Better come aboard. Things are a little too quiet around here."
at June 03, 2019