2. Skratch and the Alien Outfitter 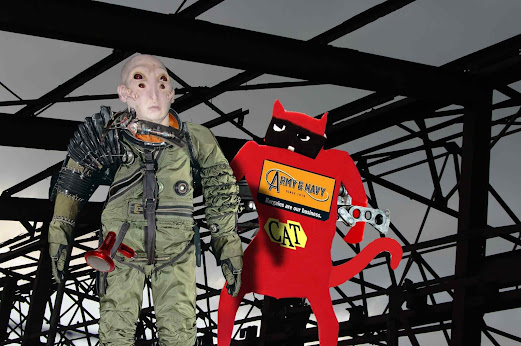 Skratch found the Alien Pilot in a remote spot, because that was the sort of thing he did well – no one knew exactly how. "Do you like your new suit?" asked Skratch, "it’s the best I could find and worth a king’s ransom!" "I hate kings," said the Pilot. "Well, a president then," said Skratch, "it’s all the same in business." "Now look, cat!" said the Pilot, "I want my money and I want it soon." "Well the Wabbit has it for you, safe and sound," said Skratch, "he knew you’d arrive here." "Then where is he?" groaned the Pilot." "Oh, that’s for me to know and you to consider," purred Skratch, "but he’s quite the wheeler-dealer. He knows a good wheel and the right person to appreciate just how round the wheel is." "What do you get out of this?" asked the Pilot suspiciously. "A small fee, nothing much," purred Skratch. "I do it for love really, a kind of hobby." The Pilot snorted. "I hate hobbies!" "Everyone should have a hobby," said Skratch, "you need to get outside yourself, let out your corsets." The Pilot snarled. "I hate ...”  he shouted. " ... corsets!" finished Skratch. "Let’s be on our way. The Wabbit is waiting." "I wouldn’t like to keep that Wabbit waiting," sneered the Pilot. "He can be tetchy," said Skratch, "so we won’t be late." "We don’t have an actual appointment," sighed the Pilot. "Yes, I’m afraid we do," said Skratch. "I hate appointments," said the Pilot.
at February 05, 2013